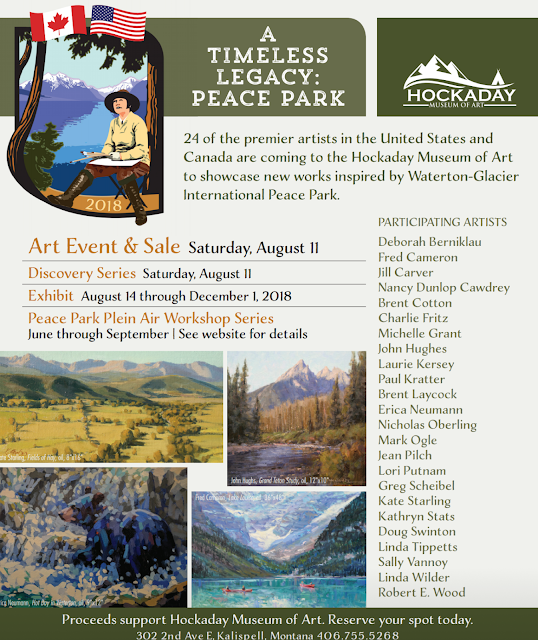 In the late spring of 2017 the invitation to participate in this one of a kind exhibition arrived. We were to paint both sides of the Peace Park - Waterton in Canada and Glacier National in America. In August 2018, the American and Canadian artists would exhibit the results at the Hockaday Museum, in Kalispell, Montana.

Beauvais Provincial Park is a favourite place to camp. 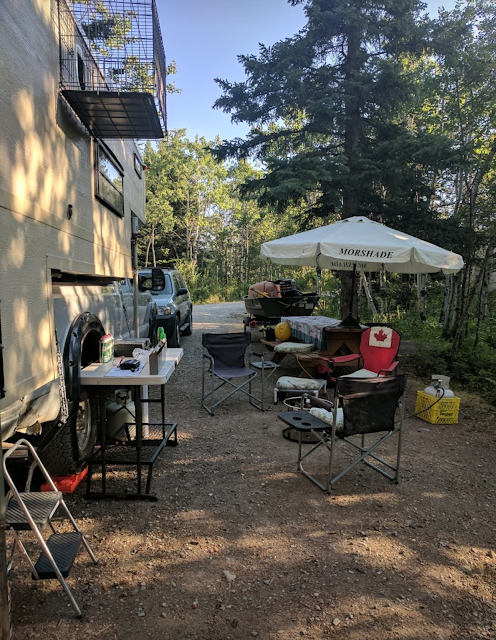 The cat loves it too. 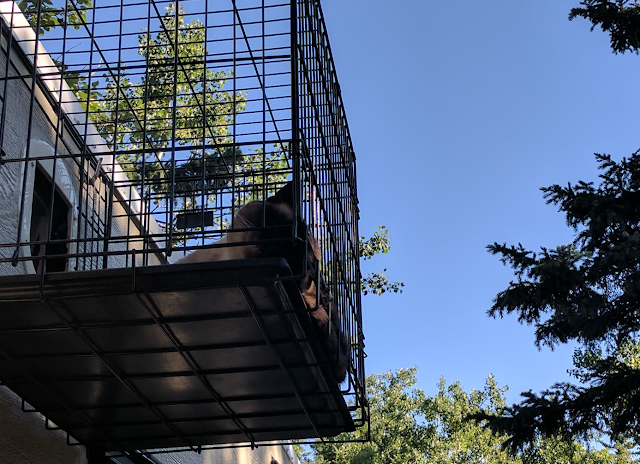 Nan, Pop, Gary, Miss P, myself and the dog piled into the car for a day trip from Beauvais to Waterton, near the end of May. 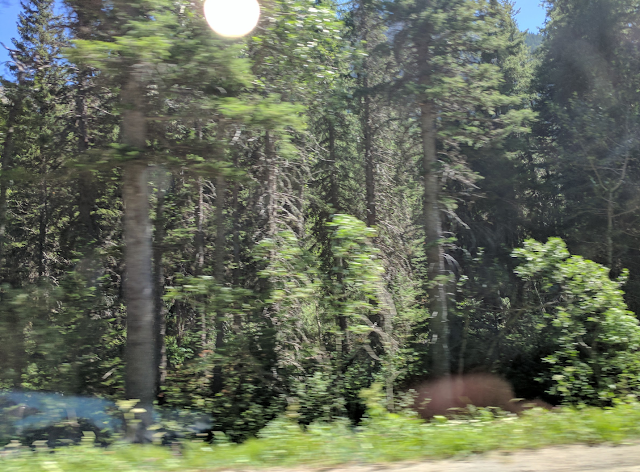 In Waterton, on the way up to Cameron Lake, the trees were gorgeous in the bright light. 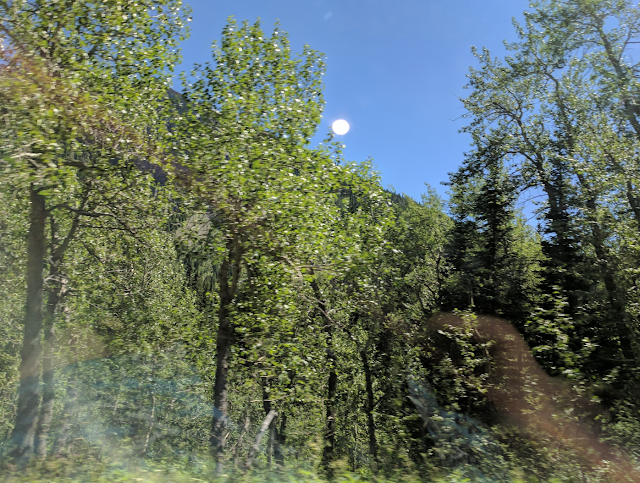 Photographed from inside the moving car, little did we know that for us, these would be the last glimpses of this forest... ...before it burned in the devastating fires a few weeks later. As painful as it is to look at these photos, we are all grateful to have experienced their beauty first hand. 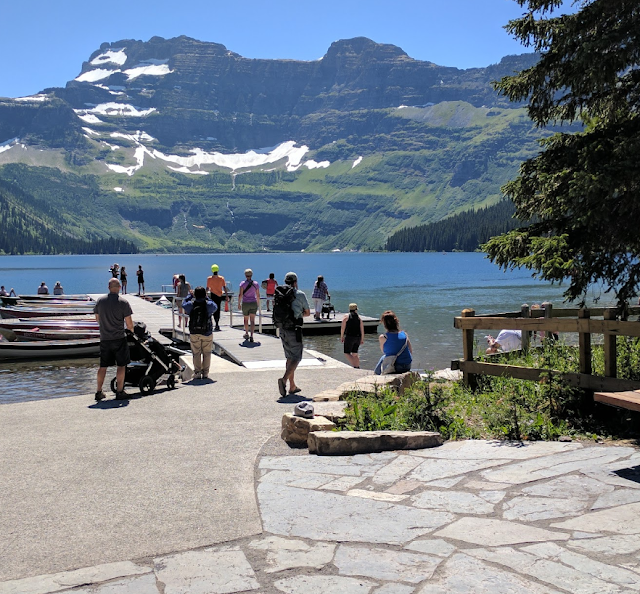 Once at the top, the first sight of the lake was jawdropping. It was teeming with people on that sweltering day. 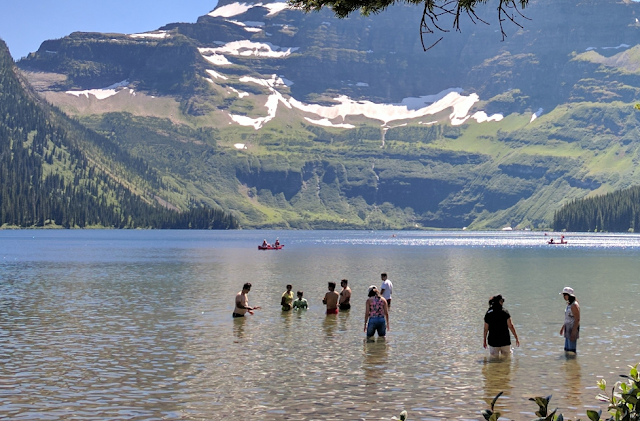 Families stood up to their knees, cooling off in the water.

With bear warning signs everywhere, it was not hard to imagine a grizzly doing the same. 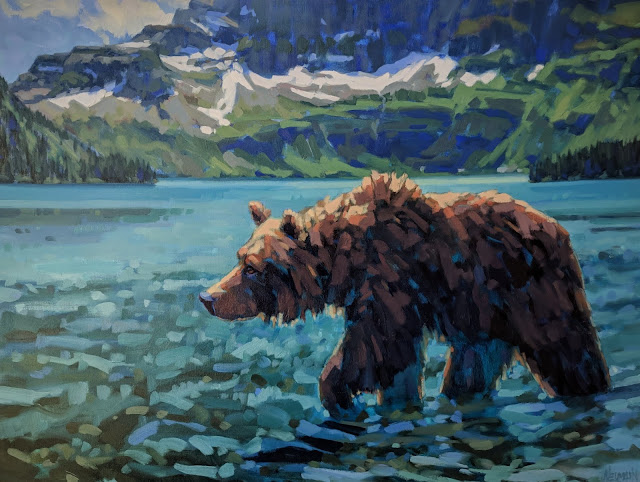 Good thing I insisted on bringing the canoe. We paddled around the lake, although it was choppy and a fight against the wind. 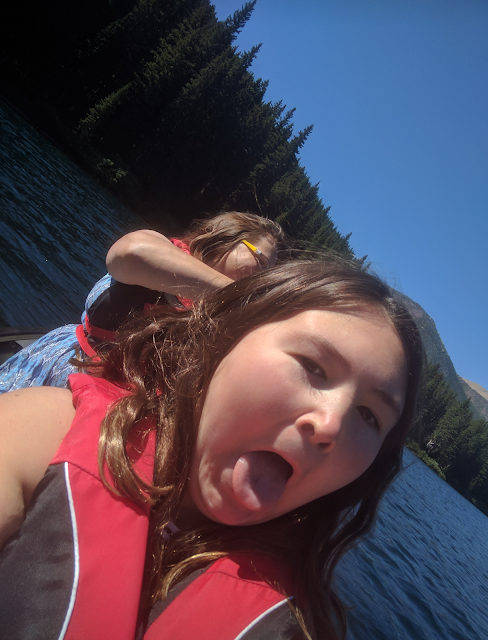 The assistant photographer masterfully captured the indescribable beauty of the lake in a single selfie. Later we would both jump into the lake with our clothes on. 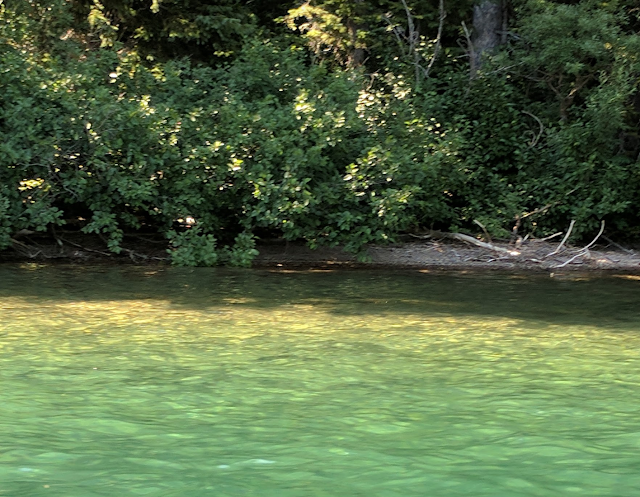 The canoe provided views of the shores, inspiring thoughts of the wildlife hidden in the cool shadows. 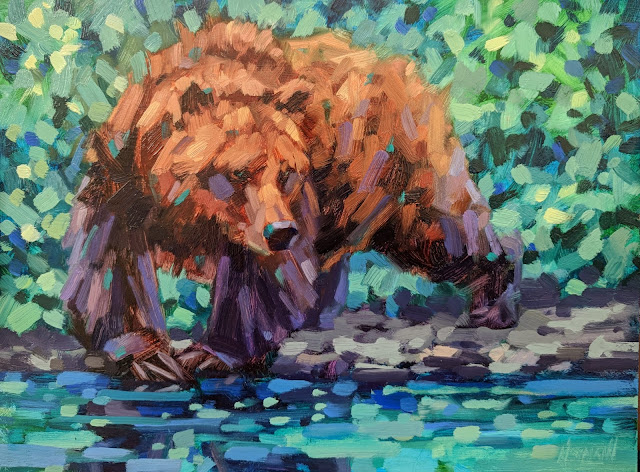 Driving down from Cameron Lake Gary stopped at a pull out, where far, far below we could see a waterfall. 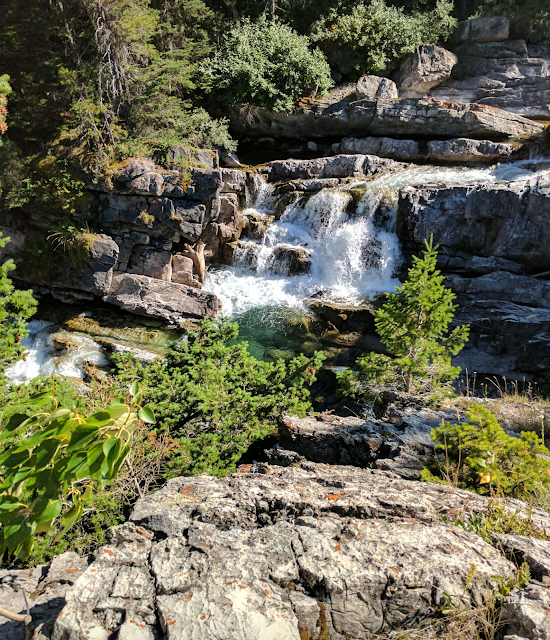 I'm terrified of heights and only thanked him for stopping there much later.

The day was so hot, I  imagined an overheated bear taking a break from her family at the bottom of the refreshing waterfall. 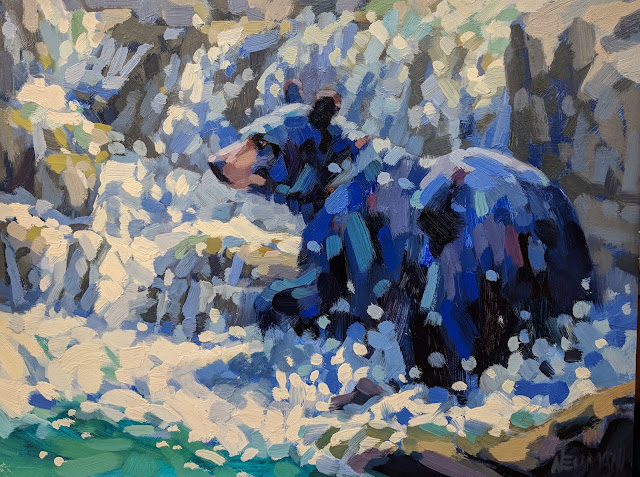 Our visit to stunning Waterton ended far too quickly. The following weekend it would be closed due to an overabundance of visitors, and later in the summer, due to the fires.

Later in the winter, early spring, I accompanied Tracy to Lethbridge, for a presentation of the Peace Park Exhibition to a special meeting of the Rotary Clubs involved with the Peace Park. 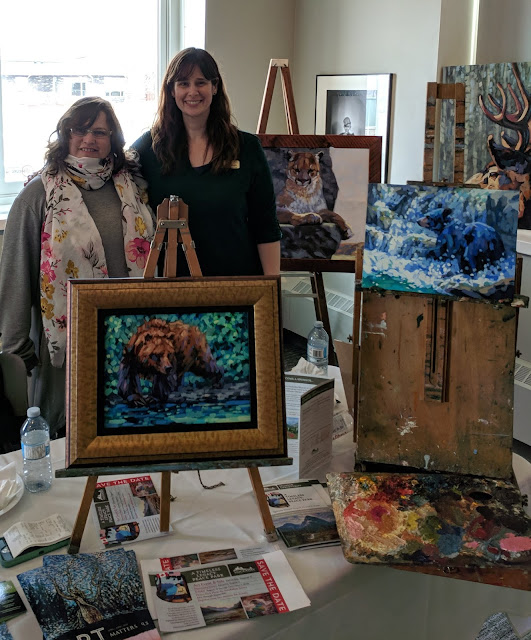 There I learned it was the Rotary Clubs that are responsible for the symbolic union of the U.S.A. and Canada at the National Parks on the border. They petitioned the government and the Peace Park became a thing in 1932.

This exhibition is the first time American and Canadian artists have joined together in a single show to celebrate the Peace Park.


Finally! Passports in hand, after watching many episodes of Border Patrol, we found ourselves in an hour and a half long line up at the border on my birthday. 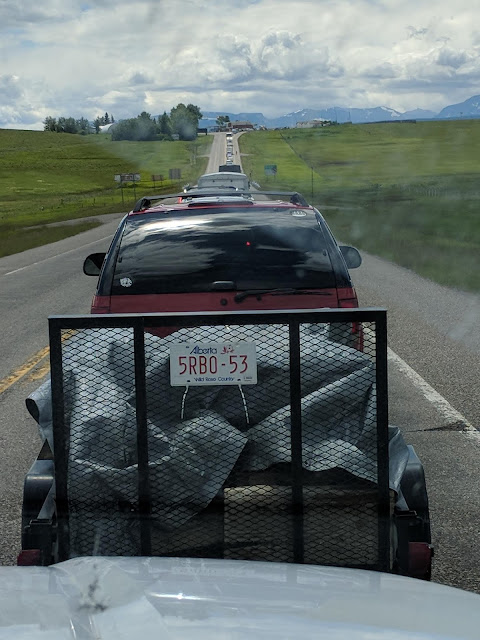 Right before the July 4th holiday... 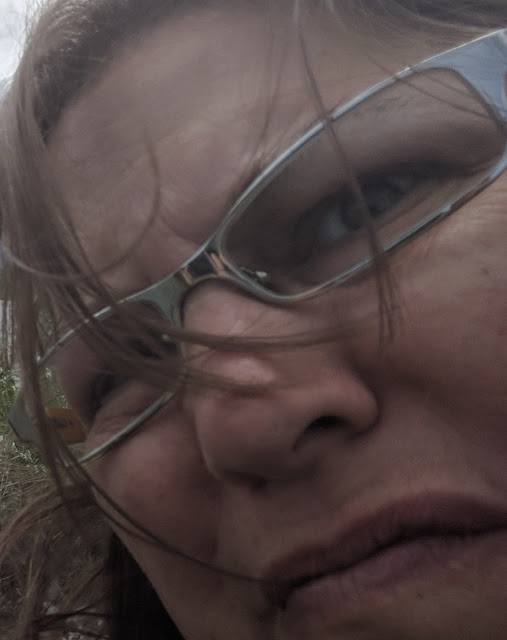 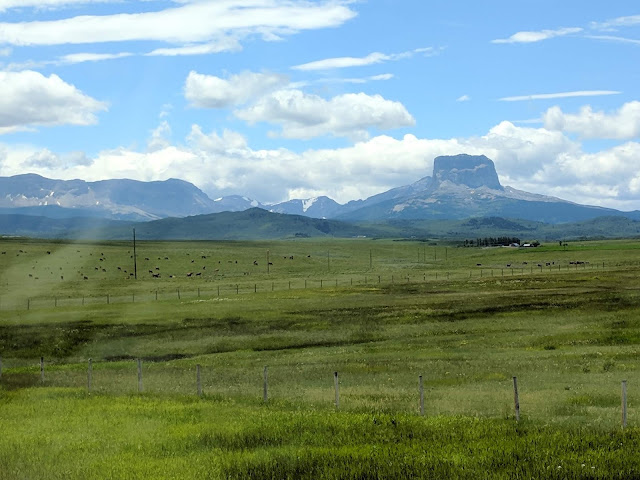 Gary's truck was not yet outfitted with belly bars for the camper, so we tented it. 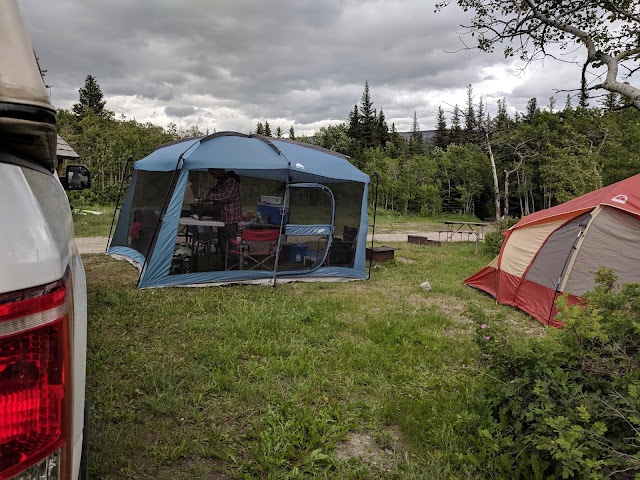 The slant of the tent was caused by an incessant, formidable, crazy making wind.

Gary is not good with gale forces, so I begged him to drop me off at the site of a turbulent view, and encouraged him to take the kids to a store.

I was finally alone. Elated, I painted in a storm. 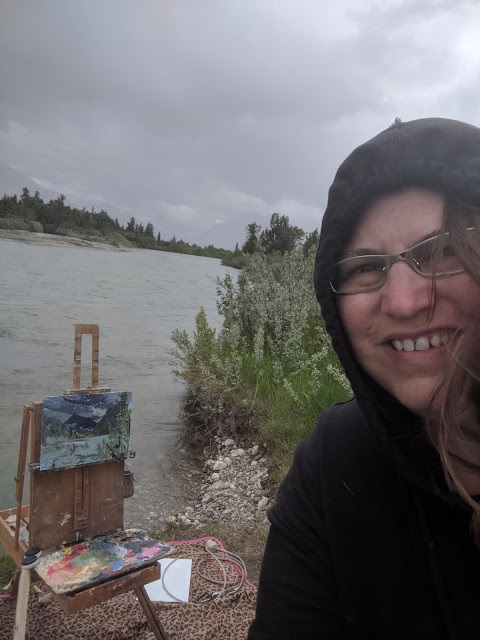 Believing he had abandoned me after not returning when it began to rain in earnest, something incredible happened.

When the rain intensified, shimmering birds began to appear. Like bats, they swooped and fluttered, skimming the water, twisting and turning. Maybe 20 or so birds, with an iridescent blue- black on their backs cavorted in the storm in front of me. 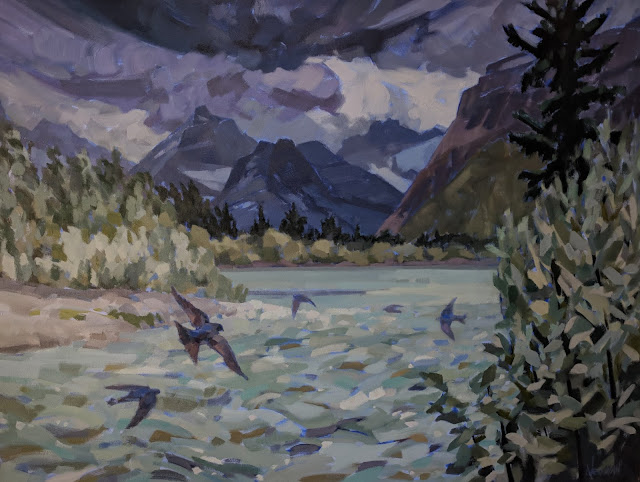 Once at home with access to Google, a search revealed them to be Black Swifts. One article referred to them as the 'Holy Grail of Birds at the Park'. All one needs to do to see them is sit by a riverbank, near where a creek flows into it, in a summer storm.

I had been dreading Going to the Sun for months. The fear of heights is a real, physical issue. But it had to be overcome to travel over that mountain. I couldn't use wine because it was too early. 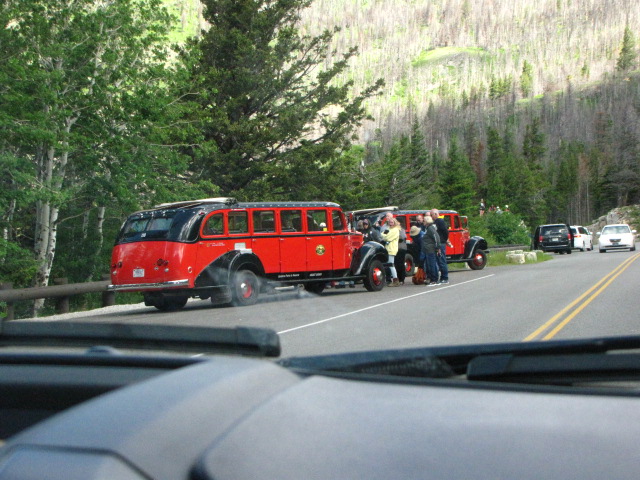 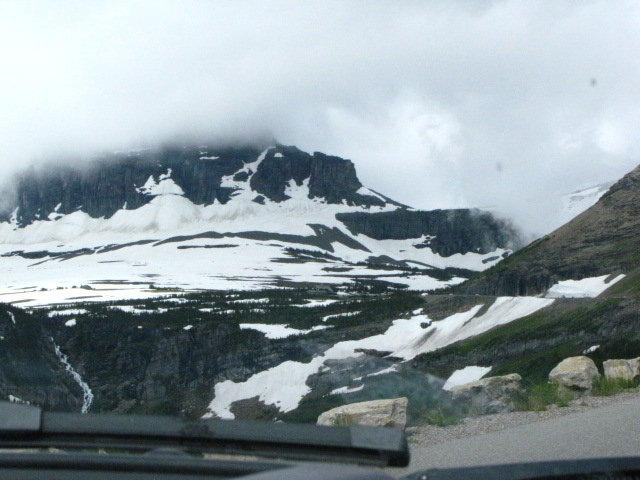 Nearing the top, I almost fainted over by the snow drift on the right. Miss P began a word game at that point, it provided, once again, much needed distraction, even though I  couldn't use the words I really wanted to. This photograph cannot convey the vastness of the space below us. You need to go and see it in person, without me though. 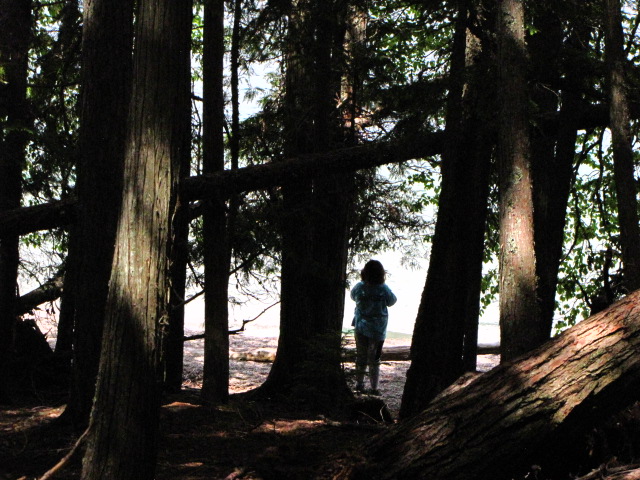 On the other side is Lake McDonald, with the colourful stones. Excited to photograph them, it was here that the camera batteries died. 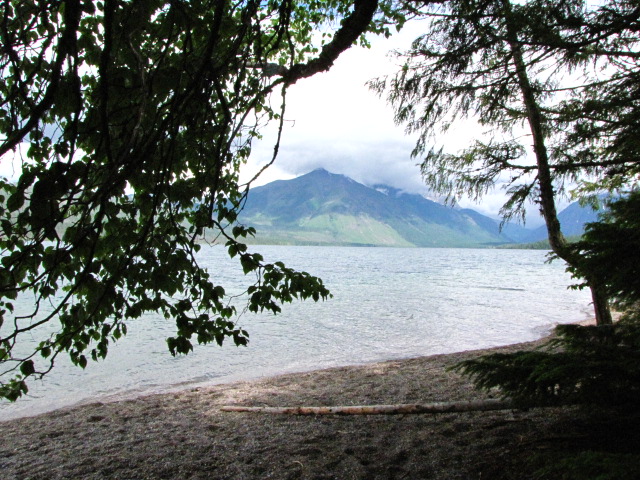 Pressed for time, we headed back up the mountain, exhausted by fear, I was unable to protest. Crowded with people everywhere, the mountain had refused to reveal its wild citizens. There had not been one wildlife encounter. Not even a deer. Maybe the swifts would be it, although that experience was more than worthy. 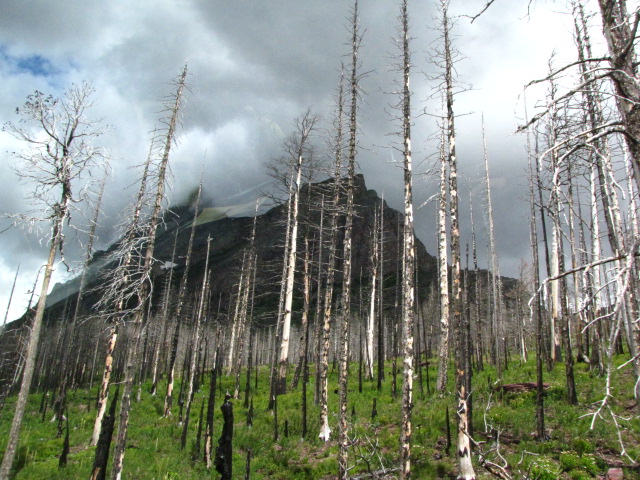 Although the fires of 2018 were devastating, the mountains are now clearly visible through the burned forest. It was fascinating and hauntingly gorgeous. Strange, tall white flowers were growing everywhere. I was able to study the area closely when the traffic suddenly halted. For awhile. 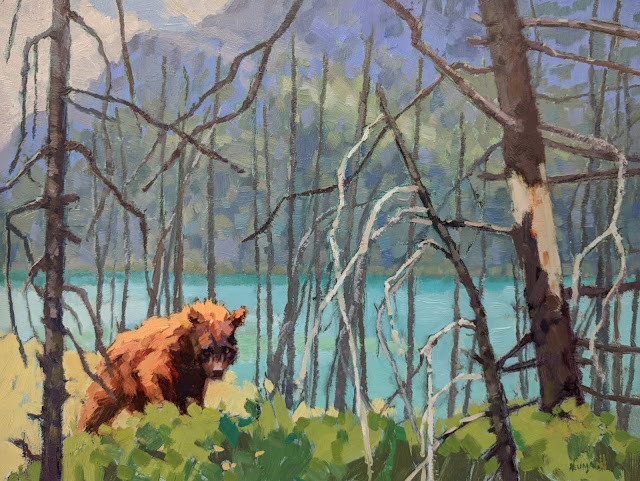 Reeling from the encounter, we continued down and around the corner at the base of the mountain, to come upon wardens firing their bear bangers towards a meadow... 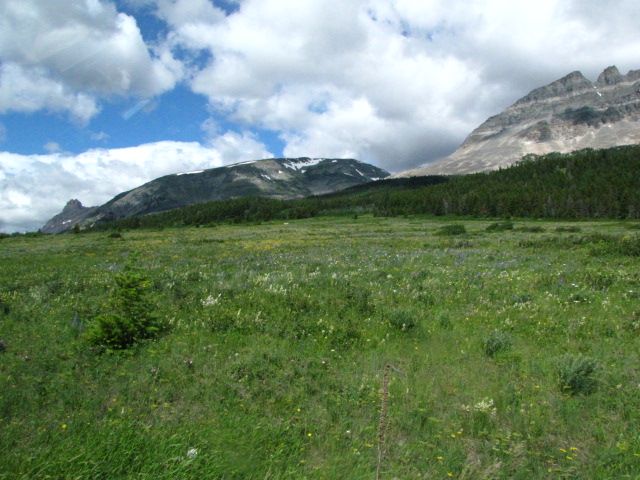 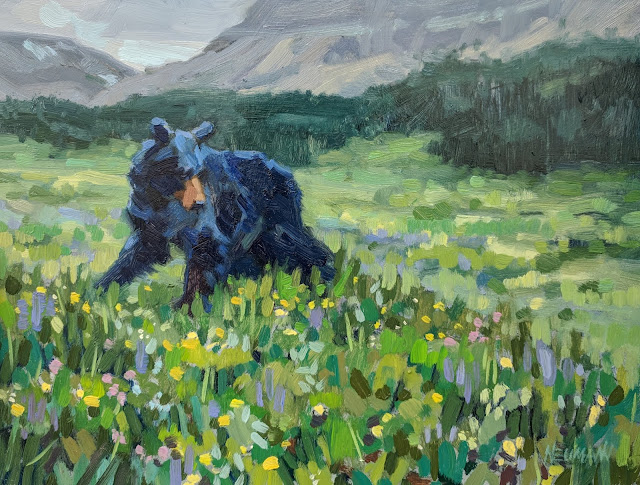 The bear loped higher up the meadow, slowing to glance back at the wardens. We were not allowed to stop - thankfully we have art.

Popular posts from this blog

June 18, 2018
The Artist as Chameleon
It is said that artists are a mirror to society, creating work that reflects the times. To challenge that notion are these photos, evidence that artists are less reflective and more camouflage. Chameleon, they blend in with their work. Like the chameleon in the wild, they are difficult to spot in their natural environment, and share similar characteristics, such as a peaceful, gentle disposition and a habit of grasping sticks all day long.

Instinct
After an extensive study, spanning a half decade, it's been determined that theses particular artists are behaving instinctively, and do not wake up in the morning intending to find the outfit that best blends with their art. They usually grab any old thing because they knew it may end up covered in pigment, and respond in a surprised manner when their behaviour is pointed out to them.

Canadian These particular artists can be found in the foothills of the Rocky Mountains, in and near Calgary, Alberta. It remains t…
Post a Comment
Read more

March 29, 2013
There is a completely natural phenomenon that consistently occurs: People unknowingly wear clothes that match their paintings. Exactly what causes this, we don't really know. At the very least, it's a sure sign that the artwork is completely honest, either that, or we are super psychic and don't know it. This was not staged. This young lady, a beginning painter, already has a deep connection with her work. If I were a better photographer you would be able to see the lines through the middle of the colour wheel she is painting.
Nicki wears a Santa apron every session. Then one day.... One day, a painter donned an all green outfit, and went to art class to paint an all green painting with a bear in it that magically matched the colour of her hair. ﻿﻿ The pattern on Barb's sweater perfectly matched the horizontal banding in the water on her painting. ﻿﻿ I know right?﻿﻿ A true geometric aficionado.﻿﻿ Thank you artists! Every time I write a new post I grab The Oracle Book …
Post a Comment
Read more